When I was growing up, in the ‘50s and ‘60s it was a very big deal to stay at a Sheraton. The brand exuded luxury and had the mystique of having outposts in faraway countries, long before globalization made it de rigueur for chains to be outside of the USA. The hotels were big, flashy, and important. Those were the glory days of the Hilton, The Ritz-Carlton, and long before each hotel brand had a multitude of sub brands.

The Park Sheraton in New York, while not the Plaza, was still a desirable address. My how times have changed.

I must admit, that in my mind, the golden age when Sheraton was viewed as a global outstation in distant lands seems light-years away. I rarely consider choosing a Sheraton and generally prefer another hotel in the Starwood portfolio.

In 2009, BrandChannel reported “Sheraton has been a brand in decline, unlike Starwood siblings W and Westin. The most recent Consumer Reports ratings ranked Sheraton as the worst in its category, based on value, service, upkeep, and problems; customers have blogged about the brand’s poor quality and even Hoyt Harper, Starwood’s senior VP of brand management, admits that “some of the hotels were substandard.”

Sheraton decided not to throw in the towel on this hotel brand, but instead embarked on a three-year, $6 billion rebranding effort that involved getting rid of properties that were subpar, redoing interiors, and overhauling all of the properties with a focus on social spaces. In October 2010, they launched an ad campaign focused on the new renovations. HotelManagement.net reported that, “A key insight that directed the creative vision for the campaign is the growing trend of travelers seamlessly blending business and leisure—also known as “bleisure”—and the demand for socially driven designed spaces and amenities. As part of the brand’s overhaul, every aspect of the new Sheraton guest experience was designed to promote social interaction and bring people together.

As reported in HotelNewsNow.com, “The US $6-billion investment in the upper-upscale brand has already paid off because market share has increased, customer satisfaction is at record levels, and the percentage of Sheraton customers who are Starwood Preferred Guest members has jumped from 39% to 45%.

And, now, yet another $20 million ad campaign is set to launch this month. The new campaign, designed by Kaplan Thaler Group and Razorfish, is called “Meet You There.” According to their press release the new campaign is tapping into the growing demand from travelers for spaces that promote social interaction and bring people together. Every aspect of the new brand is designed to meet this expectation. And, of course, the ads will showcase the new enhancements.

So, will it work? My concern is that Sheraton has upgraded its interiors, provided new spaces for interaction, launched new programs like Link@Sheraton and Sheraton Fitness, but have they really redefined their brand or just fixed infrastructure problems that certainly needed fixing?

Brands are not “fixed” that easily. What will Sheraton have to do to get increased mindshare from a new audience that is probably not familiar with the luxury brand of old, and what will it have to do to reinstate Sheraton into the minds of those who “knew it when”? It will be interesting to wait and see if social interaction as a brand has legs in the hotel space. Let’s face it, if it is successful, I wonder how many spouses will even let their husbands or wives check into the Sheraton for business? 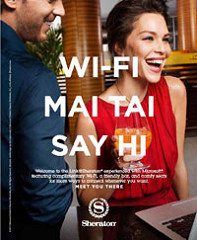